I come from good people. 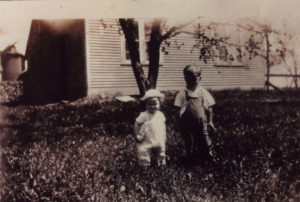 I always wanted a brother, until the day I realized if I got one he’d be a pest. That’s why this picture of my father and his brother as little boys is so funny.

Dad’s wearing a play suit and a bowler sun hat turned up around the brim and his brother is head and shoulders taller beside the Island house.

The sunlight always looks so brilliant, almost forced, as if it had the ability to burn the paper they used the print the old deckle edged photographs. It must have been necessary to give the film to the attendant down at the general merchandise store and tell him how many prints you wanted and wait a week or more for the development.

A week didn’t seem like too long to wait for your pictures. I waited a long time for my brother. They never found one for me. They never made one for me. I suspect my father and his brother got along. They had no choice. My grandparents would never have allowed it any other way.

They went to war, these two little boys. They both played basketball in college and went as volunteers becoming officers in the United States Navy and both served on the motor patrol torpedo boats in the South Pacific. They both stood at the wheel and throttles of the most heavily armed ships in terms of tonnage to munitions in the Navy and they both met one day on a beach without any idea of the other’s whereabouts.

My father walked down a deserted South Pacific beach and saw a lone man walking toward him.

I wonder if he thought about meeting the enemy there on that beach.

They drew closer, two men in war time, through the haze of surf and glaring sun, the sound of water making any kind of salutation, warning or countersign impossible.

Then something in the way they looked to one another made them all the more incredulous, questioning their own senses as men do in war time, trained to doubt, shoot first, ask questions later except this time maybe they had no guns, walking down the beach toward one another in their skivvies or barracks fatigues, but what if they let their arms fall carefully toward the standard issue Colts in the web belt holsters they wore as naturally as their dog tags without wanting to be conspicuous before they realized once and for all with utter astonishment they’d met their own brother on a beach in the middle of a World War.

They grinned and ran toward one another then threw their arms around and held each other tight, alive and healthy and brothers over eight thousand miles away from home.

“What the hell are you doing here?”

“Fighting a war same as you. What the hell are you doing here? What do you hear from the folks?”